The early days of DCB were quite modest. In 1958, a group of 8 players, who had previously been members of the British Legion Band decided to form a new Band. After much deliberation the name of “St. Thomas Military Band” was chosen and the band began to find its feet under the musical direction of Mr. Joe Thwaites. Over the first few years the band had its ups and downs, concentrating efforts primarily in the areas of marching engagements and performances in public parks during the summer months. 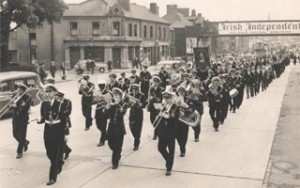 The band began really to develop musically in the mid 1960’s when it began to enter performance competitions, culminating in the first ever National Band Championships, which were held in Dun Laoghaire in 1966 and which the Band won.

Sadly, in 1971 Mr. Thwaites passed away which led to a search for a musical director who could take the band to the next stage of its development. This was a frustrating and unsuccessful process for all concerned until the day that Mr. Pat Dunleavy happened to be walking past the band’s rehearsal room and decided to stop and listen. With his pedigree from both RTE and the Army School of Music there was an instant connection with the Band and Pat was to become the heart and soul of the musical direction of the band for the next 30 years.

Change was afoot, most noticeably in 1973 the decision to cease marching to help focus the minds solely on musicianship and the quest for excellence on that front. At the same time, the name of the band was changed to Dublin Concert Band to more closely align the band to the performance based ensemble that it had become. Another feature of the mid 1970’s was the fact that the reputation of the Band was such that its membership had swelled to some 60 members. This afforded Pat the opportunity to challenge the band musically and to introduce a repertoire that up until that point had been beyond the reach and capability of DCB.

Another important element of the Band’s development during that time were the ground breaking first female members of the band. Whilst there was hesitation among some of the members at the time, this dissipated once the first ladies started to join the band and began to add that extra dimension to the band’s performances! 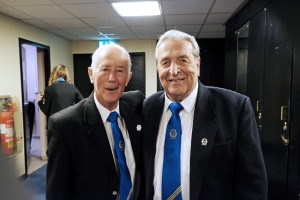 DCB won the National Championships for 3 years in a row in the mid 1970’s and success continued throughout the rest of that decade. In 1979 a turning point came. The Band had become so large that the clarity of its sound was becoming somewhat blurred. The solution was simple, the Band was divided into two groups and DCB now had both a senior band and an intermediate band, with the latter acting as a natural talent pool for the former.

In 1981 (after having played for the Pope in 1979 and having featured in RTE’s Strumpet City in 1980) the Band decided to make the trip to Belfast to complete in the North of Ireland Band Championships. This was done at a time of great trouble North of the border and many of the members of the Band had expressed certain misgivings at the time. As Pat Dunleavy himself later recalled in 1987 “The standing ovation the Band received as they took the stage before ever a note was played is my greatest memory of my [then] 14 years with DCB”. Naturally DCB went one step further by winning the competition as well.

DCB powered on into the 1980’s and by 1986 (having won 4 more National titles in the interim) the Band was strong enough to begin to offer beginners classes and to set up a junior band. The DCB family now comprised three bands and over 120 active members. The Band celebrated 30 years in 1988 (with a concert in the National Concert Hall). 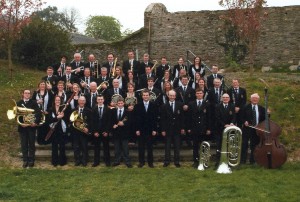 Into the early 1990’s and the band continued to enjoy success. In addition it became a regular performer in the National Concert Hall, undertaking RTE lunchtime concerts amongst other engagements. It also played at the launch of Budweiser in Ireland, and event fondly remembered by some and not remembered at all by others!

As the 1990’s progressed so the membership of the Band began to dwindle. This was in part driven by the baby boomers of the 1970’s and 1980’s moving on to start lives and families of their own and the sense that the golden generation of the Band had now passed. As a response to this DCB was consolidated back into one Band in 1994 and continued to focus on what it had always done best, produce quality performances and musicianship.

By 1998 DCB felt comfortable enough to engage in a foreign trip. It had performed on many occasions in the UK over the years, but the first foreign trip was a significant undertaking. The Band travelled to Aarhus in Denmark for a 1 week trip, undertaking 3 concerts as part of the itinerary.  The Band celebrated its 40th anniversary that year with a performance in DIT Kevin Street.

In 1999 DCB was afforded the opportunity to participate in the Frederick Fennell Festival in Dublin where the world renowned wind ensemble maestro conducted DCB in a performance of Borodin’s Prince Igor Overture. This was a truly magical (if somewhat daunting and nerve-wracking) experience for the band. Dr. Fennell passed away some years later, however his memory and the memory of that performance lives on.

As the new millennium dawned, so the challenges facing DCB began to be more severe. Celtic Tiger Ireland brought with it many and varied opportunities for young people in particular and in that context it was difficult for the band to firstly attract and secondly retain a sufficient supply of new blood into the organisation. As a direct response to this new environment a second foreign trip was organised. In June 2001 DCB spent a week in the Chianti region of Tuscany, Italy, performing 3 concerts in the process and also reignited interest in the Band and what it had to offer.

Later that same year, after 30 years loyal and wonderful service, Pat Dunleavy retired as musical director of the Band. The impact that Pat had on the development of the Band during that time was profound and his legacy is unquestionable. Pat still retains an active interest in DCB and the Band.

As in 1971, a serious challenge now faced DCB. In 2002, the Band appointed Fergus O’Carroll as musical director. Fergus’ association with wind bands had been significant and DCB had collaborated with him on many occasions over the years. Fergus’ agenda was clear – the Band would only develop as an organisation and would only attract the requisite calibre of player if the repertoire placed before it is suitably challenging. Fergus won the National Band Championships with DCB at the first time of asking in 2002, and that was to trigger an unprecedented 6 National Titles in a row between 2002 and 2007.

At the same time, DCB brought through a number of younger conductors to work with Fergus as part of the musical direction team. Gavin Maloney (2004 to 2008), Brendan Breslin (2009 to 2013) and current conductor John Doyle (2014 onwards). Each have brought with them their own styles and ideas as to how to move DCB forward m

usically. In turn, DCB has helped each of them develop in their own careers.

DCB celebrated its 60th anniversary in style in 2018 with a sold out concert in the National Concert Hall. Since then membership of DCB has grown again, driven by a new generation of musicians coming through, an influx of international musicians and almost annual international trips to ensure that the agenda is always fresh and challenging in DCB.

Having won the National title for the last 10 years in a row, the band is focused on continual improvement, fresh challenge and new recruitment and all in a spirit of musical excellence and lifelong friendship under the new leadership of Musical Director Brendan Breslin.