Based in Dublin’s historic City Centre, DCB is Ireland’s premier Amateur Concert Band. Consistently over the last 60 years DCB has been unique amongst its peers in that it brings together a complete cross section of musical talent, youth and experience, enthusiasm and maturity. The Band’s ethos is all about excellence of music making, but in an environment of mutual respect, friendship and most importantly of all, having fun along the way.

DCB has always been a performance driven ensemble, seeking to provide musical entertainment for as broad an audience as possible. During the summer months the band performs in a variety of public and private venues around Dublin. These occasions are relaxed and the repertoire chosen is suited to a wide variety of musical interests and tastes. 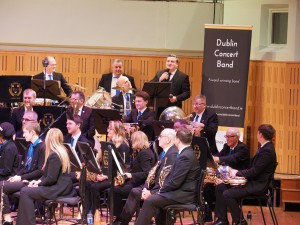 The Band also performs at religious ceremonies, providing sacred music and also traditional Christmas performances later in the year. The Band also undertakes a series of both private and public concerts throughout year. Concerts are sometimes on a standalone basis, but also organised in conjunction with other bands, choirs and soloists, with chosen repertoire adjusted to meet the needs and expectations of the specific audience in question

Over the past 20 years, DCB has also had the honour to represent the city of Dublin and the Country of Ireland at a number of international festivals. Again, these trips are approached with the same overall philosophy, excellence in music making with plenty of fun along the way. The Band has toured Aarhus, Denmark (1998), Tuscany, Italy (2001 and 2015), Todnauberg in the German Black Forest (2004), the Anches d’Azur Band festival in La Croix Valmer on the French Riviera (2005), the European Wind Ensemble Festival in Bad Schlema, Germany (2010, 2011, 2013) and Veldhoven, the Netherlands (2014), Italy (2015 Gaiole in Chianti) and La Croix Valmer in France this summer 2017.

DCB is passionate about striving for musical excellence and competitions are a great way to consistency challenge the Band’s ability and achievable repertoire. DCB is a major musical force in the field of both national and international Band contests.
Since the competition’s beginnings in 1966, the Irish National Band Championships has been won by DCB on more than 35 occasions, including the remarkable achievement of having won 12 of the last 13 National Championships. In addition, the Band has travelled to the Northern Ireland Band Championships on 10 occasions in the past 20 years, and winning on 9 of those occasions. The Bank has also travelled to the South of Ireland Band Festival 8 times in the past 20 years, winning on 4 occasions. The band has also competed successfully at the British Championships and at the European Festival of Bands.

Do you play a wind, brass or percussion instrument?
Are you interested in joining one of Dublin’s most active and welcoming amateur musical groups?
Dublin Concert Band are recrui 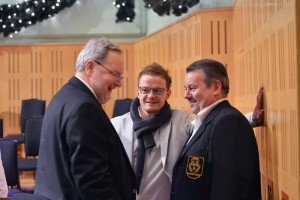 ting new players! For over 60 years we have been a central part of Dublin’s cultural life, playing in up to 20 concerts each year, and competing in band competitions at home and abroad. We are now looking to add to our ranks. Our band members range in age from 18 to over 80, and they all contribute to a family atmosphere and support everyone’s musical development.

If you play to around Grade 8 or above, are aged 16 or over and are interested in joining us, we’d love to hear from you. Send us a mail at dcbsecretary@gmail.com and maybe you could become our newest member!